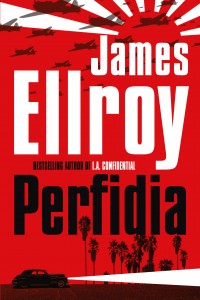 This is the real deal, but if you’re squeamish, it’s not for you.

I come to it as someone who’s read him on and off over the years (American Tabloid, L.A. Confidential, the edition of Noir short stories he edited in 2011). I even almost abandoned the very first thing of his I read, The Black Dahlia, because I found the dialogue, speed and characters almost impenetrable*. Lucky for me I didn’t.

If you’ve even only seen L.A. Confidential you’ll be familiar with Dudley Smith, the cop James Cromwell plays. He’s one of the central character in the original 1950s-set L.A. Quartet of novels and here, Ellroy takes the story back to the eve of Pearl Harbour in 1941 and tells a huge, sprawling 720 page story over just 23 days.

I’m not telling you anything else about it, save to say that it’s monstrously brilliant, a towering animal of a thriller that plumbs the nastiest, darkest corners of the human soul and one of the more shameful parts of the American experience during the war. I am *gagging* for the next part.

*It’s the origin of the 100 page rule I have. I can’t abandon a book, no matter how much I think it might not be for me, until I’ve read at least 100 pages. With The Black Dahlia, something clicked around that point and the book lit up.