The Knowledge by Lewis Dartnell 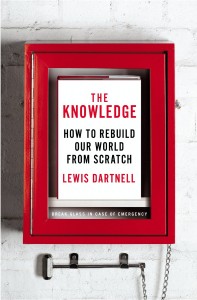 See this is the sort of book that immediately grabs my attention. It’s not in any way post-apocalypse fiction (and I read a lot of that) but instead a genuine, serious assessment of what the human race would have to do to restart everything from scratch (growing crops, fabrication chemicals, making metals) in the eventuality of the very worse happening.

I love what he’s done by first picking the Armageddon that he can work with (a pandemic that kills off 99% of humanity instead of a nuclear war or asteroid strike, thanks for asking) and then reminding us that while all of humanity’s expertise is scattered here and there it’s mostly in specialist texts that are understood by specialists themselves (99% of whom are now, of course, dead!)

We’d need a book, one book, to get us back on our feet.

My only criticism is a stupid one, it’s that The Knowledge gets very technical in places in describing the processes the small band of survivors would need to use to get back on their feet! In doing exactly what it sets out to do it made me skim a little.

That’s not to say that it doesn’t make this a thought-provoking and head-tilting exercise and one that I’d recommend if you have any interest in how things are made, how processes work and what bands of people would need to get cracking with in the eventuality of disaster.

It also at least partially inspired THIS.