From Out Of The City by John Kelly 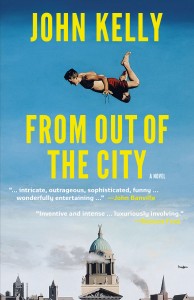 It’s always hard reading something written by someone you know, as you feel a pressure to like it more than you probably would if it were something by a complete stranger. Therefore it’s an enormous relief when you do read such a thing and end up thinking it amongst the best things you’ve read this year so far.

From Out Of The City is set in a mid-distant future dystopian puppet-state Ireland that’s gone to the wild, feral dogs and where the U.S. President has just been assassinated at a state dinner. No more, I don’t believe in spoilers.

A man far greater than I once said that all proper dystopias should be thinly veiled funhouse mirrors of the present day – John delivers this in spades with American influence everywhere, stony politicians, oversexualised infotainment reporters and everyone digitally surveilling everyone else. It is our worst possible future.

The thing this reminds me most out of everything that I’ve read recently is Kevin Barry’s brilliant City Of Bohane. It’s a book that I’ve found myself thinking about frequently since I read it. It comes highly recommended.