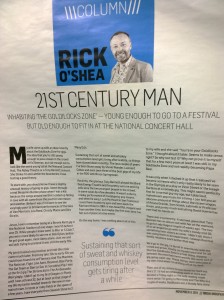 My wife came up with an idea recently about the Goldilocks Zone for gigs. The idea that you’re still young enough to pass unseen in the crowd at Ed Sheeran or a festival but old enough not to look like the weird young lad at the National Concert Hall, The Abbey Theatre or a Tony Bennett concert. She thinks I’m still within the boundaries; I love testing a good theory.

To start with, you should know I have a slightly unusual history of going to gigs. I went through a real Benjamin Button phase when I was a kid because the songs around me that I ended up falling in love with all came from the past for one reason and another. Before I was 21 I’d been to see the varyingly poor to brilliant performances of the likes of Van Morrison, Lou Reed, Christy Moore and Dire Straits. Dire Straits was the poor one, what was I thinking? I ended up spending most of the gig in the bar listening to 15 minute Mark Knopfler guitar solos. Probably the best place to listen to them to be honest.

Jesus, I even remember being at a Bonnie Raitt gig in the National Stadium at one stage. I was 55 before I was 25. While people I knew went to Blur or S Club 7 you were more likely to see me at a mumbly two hours spent with Bob Dylan, before he got good again, most likely alone. Just me and oul lads trying to pretend it was still the early 70s.

My musical resurrection and mid-life crisis all in one came much later. From my late 20s to early 30s you could have found me at Florence And The Machine, The National, Fight Like Apes, Beyoncé, Bloc Party, The Go! Team or Dan Le Sac Vs Scroobius Pip. I was at the first gig The Streets did in The Ambassador. Worryingly, I didn’t go to my first Oxegen or Picnic until I was at least 32 but at least at that stage of my life my tastes tended towards the new or non-mainstream. In tents or rainy fields in the space of a few years I saw everyone from Seasick Steve to Too Many DJs.

Sustaining that sort of “sweat and whiskey consumption” level gets tiring after a while so things have slowed down recently. The last couple of years I’ve been to and been blown away by Stevie Wonder, Leonard Cohen and even seen 3 of the best gigs of my life in the RDS with Bruce Springsteen.

Recently the glorious Tony Bennett played the Bord Gais Energy Theatre and I’m pretty sure me and my wife were the two youngest people in the crowd, in some cases by a few decades. It wasn’t a dusty, creaky performance of nostalgia by any means and when he sang I Left My Heart In San Francisco I could have closed my eyes and been back the Fairmont Hotel in 1964. It was beautiful, elegant and a thing from another time but maybe the first ever time I’ve felt out of place at a live event.

On the way home I was rattling about all of this to my wife and she said in that offhand fashion of getting straight to the point in a few words that she has “you’re in your Goldilocks Zone.” I thought about it later. Seems to make sense, right? So why not test it? Why not prove it to myself that for a few more years at least I was still in my Goldilocks Zone and not rapidly becoming Papa Bear.

It was only when I stacked it up that I realised I’ve become someone who’s only really likely to be seen in The Olympia at a play or Vicar Street or The Iveagh Gardens at a comedy gig. This might seems perfectly fine for a normal guy my age, but I play loud, mainstream pop music for a living. I can tell you an obscene amount of things about the recent singles of Ariana Grande, Sam Smith, Labrinth or Professor Green and pretty much everything David Guetta has ever had his hands on.

There was a symmetry, it seemed, given that Tony Bennett has an album out with her at the moment, to go to Lady Gaga a couple of weeks ago. The two of us arranged to go with my wife’s younger, trendier mid-twentysomething twin sisters as cover. I didn’t tell them I was using them in an experiment. I always find that family relations work better that way.

We’d go to the gig, I’d blend in seemlessly with the crowd and prove finally to myself once and for all that the Goldilocks Zone is a real thing and that I’m in it, slipping seamlessly between the entertainment worlds like some sort of gig-going super-spy. These things seem plausible in my own mind when I’m drifting off at my desk of a morning, y’know?

Then one of my sisters-in-law threw her back out at work. She’s 27. I’d had an exhausting week at work and decided a Friday night on the sofa reading made more sense. I’m going to Morrissey and The Who in a couple of weeks. Goldilocks was a bloody fairy story.