Sadly, this is my final column for Insider Magazine as the current edition was the last.

You can read all the old ones HERE. 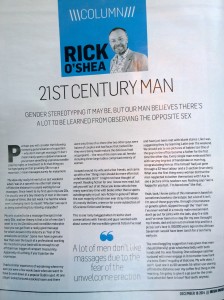 Perhaps you will consider the following sweeping generalisation of a question – why don’t men get massages? I don’t mean manly sports rubdowns because you’ve torn something unpronounceable playing rugby or to fix that thing you twinged going on that grueling 10k run up a mountain, I mean massages purely for enjoyment.

The idea only really hit me full on last weekend when I was in a spa with my other half staring off into the distance in a sauna waiting for our massages. Since I went to my first spa for one in my late 20s I’m usually one of a tiny minority of men in the room. A couple of times, like last week, I’ve had the whole men’s changing room to myself. Why don’t we see it as being something fun, relaxing, enjoyable?

My wife studied to be a massage therapist in her early 20s and her theory is that a lot of men don’t want to try the Zen bliss and incredible endorphin buzz you can get from a really good massage for what’s known in the industry as “fear of the unwanted erection”.

Some men have a genuine fear that even the touch of a professional working the muscles in your back will be enough to set off their hair-trigger of rampant masculinity. Apparently it’s a thing, if you’ll pardon the expression.

I had a similar experience of wondering where my own sex were a few weeks back when we went to have brunch down at the Whitefriar Grill. At one stage I looked around a packed room and there were only three of us there (the two other guys were halves of couples and had faces that looked like they were being made endure the delicious food at gunpoint) – the rest of the room was all female including three large tables comprised entirely of women.

I scoped around my wife and a few friends and came up with a few “things men should do more often but unfathomably don’t” I might not have thought of myself. Reading fiction for one. I know men read, but ask yourself out of all those you know who do how many spend any time with books other than a sports autobiography or just non-fiction in general? When the vast majority of Irish men ever stray into novels it’s mostly thrillers, crime or, for a rare subsection of us, SF/fantasy.

This is one I only twigged when I tried to start conversations with friends and guys I worked with about some of the incredible general fiction I’ve read and have just been met with blank stares. Like I was suggesting they try learning Latin over the weekend.

We should ask to see pictures of babies too! One of the guys in the office became a father for the first time the other day. Every single man embraced him with varying degrees of handshake or manhug congratulating him as if he himself had just gone through a 33 hour labour and a C-section (true story). What was the first thing every woman did that the men neglected to bother themselves with? Ask to see a picture of his newborn son. Nothing says “we’re happy for you but… I’m bored now” like that.

Yeah, look I know all of this nonsense is based on sometimes baseless stereotype, but a lot of it isn’t. I’m one of those guys who, through circumstance or genetic glitch, slipped through the “man” net. I’ve never worked in a mostly male environment, don’t go out for pints with the lads, play 5-a-side and I’ve never been on a stag (for my own I brought my friends, dad and son out on a boat trip and for a pizza.  Let’s face it, 100,000 years ago on the African savannah I would have been lunch for a lion fairly early on.

The most boggling suggestion I was given that men should (literally) grab wholeheartedly with both hands and try was flossing. One colleague said her husband will never engage in it no matter how hard she tries. Even I’m guilty of that one.  My wife does, I don’t. I just see it as 90 seconds I’d rather use staring off into the distance over my coffee first thing in the morning. I’m going to give it a go just for the craic. Sure what do I have to lose?