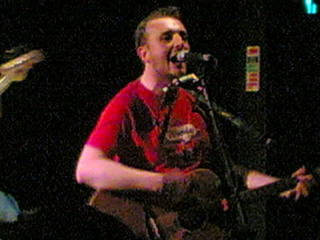 Wow! Feckin’ technology, huh? Have only just realised now that I can post piccies from my phone here and what better place to start than my brother onstage in Whelan’s last night (the band he plays in Penfold DM were doing their second headline gig there).

I know he doesn’t read this so I can embarass him to my heart’s content 🙂 Hadn’t seen them in about 3 years or so for one reason and another (I used to work nights, they’re big in Dingle and seem to spend half their time there!) and they totally blew me away…

I genuinely hadn’t expected them to be as tight as they were, the electricity and positive vibes that came off them lit up what was a jammed room (they opened up the balcony about half way through their set and it seemed to give them even more of a lift) and Brendan, the lead singer, was even more of a force of nature than the last time I saw him 🙂 Spot on!

Yes, I know I’m related to the guitarist and that in theory you shouldn’t believe a word I say but this is my and I’m one of those depressingly honest people who, if I can’t say anything nice I won’t say anything at all…. 🙂 Anyhew, any band that writes songs about being a bee, Ken and Barbie’s relationship, being dumped for drinking and Fraggle Rock are alright in my book… 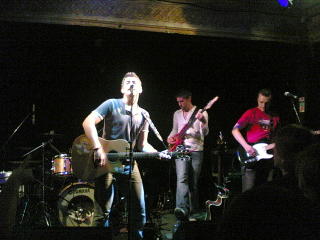 They gig in Dublin and Dingle fairly regularly – I’m sure you can find out all about it on their website:

PS Moment of the night? When my wife came back from the ladies to tell me there was graffiti about me in there! Score!! She even added to it….

PPS How juvenile am I if that was my moment of the night? And no, I can’t repeat it here as it’s too filthy for even for the internet!!!!!

PPPS Dan Hegarty came in too bless his little cotton bobby sox… Told me too that he’s only just found out that I’ve been mentioning him here but I couldn’t tell whether he was happy or angry as, at 6’5″, the low flying clouds around his head prevented me from checking out the expression on his face…. 🙂