I’d apologise for being missing this week but my ribs still hurt so much from vomiting that most kinds of self-expression are painful (and yes, I know you didn’t need to know that but you’ve put up with the wasps shagging, the magic eye pictures of Jesus and the obsessive messages from coffee cups so I figured what the hey)

Let me give you a brief (and mostly nasty detail-free) rundown of my week:

My little boy’s school have an inservice day so head to the Zoo in the freezing cold even though I have stomach cramps (must have had something dodgy the day before) . 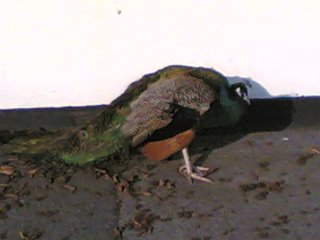 Spend the next 24 hours hunched over toilets, delirious or unconscious. Rest of the family got it the following day. Even now I’m still pretty much constantly nauseous and only really speaking (or typing for the matter!) half-sentences. Thus is my devotion to you that I’m here at all…

Tuesday and Wednesday could really do little more than sleep, drink water and not eat. Even tv was too much of a stretch.

Had it once before in 1992 after drinking some water from the river in the Gap Of Dunloe (yes, it seemed like a perfectly reasonable thing to do at the time) and if it’s another 14 years before I have it again it won’t be a day too soon. I wouldn’t wish it on my worst enemy and I’ve wished some pretty heinous things on my worst enemies in the past… Actually to be fair I don’t have worst enemies… Just a couple of people I don’t send Christmas cards to.

Really pissed off about missing the live Meteor show we were to do on Thursday. Love doing live things like that and had a load of people lined up to come in but c’est la radio…

Normal service has been resumed…