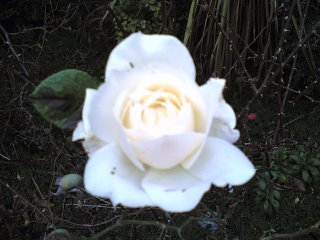 Last substantial post for the day, I swear (accompanied by the rose currently blooming in my almost sub-zero garden) .

There I was at the airport on Saturday evening with my largish cd box heading up to the gig. They ask me to bring it over to the outsize baggage counter (as happens fairly often) and I start chatting to the security guy there about where I’m heading, what’s in the box etc.

He runs it through their x-ray machine and asks me to open it up just so he can have a quick look. It’s then that I almost fall through the looking glass. You read about it in the papers every day and you always say to yourself “How on earth would someone do something as stupid as that…?”

Dear reader, I was that stupe. I heard myself, in an attempt to be jovial and friendly, saying:

Immediately visions of multiple body cavity searches in darkened rooms and being taken away in a hood to be interrogated by the CIA in Turkmenistan flooded my head and all I can say is thank God I live in Dublin.

Soon after that I was enduring the indignity of taking off my shoes for the next line in the war against error… It’s not that much of a hassle (even if no-one looks sexy or even presentable putting their shoes on while hanging on to a counter in a shopping mall) but I do feel genuine empathy for the security staff who have to endure it all the work-long day.

9 to 5 nothing but smelly feet. Every possible shape, variety and odour and all because one nutjob tried to set his shoes on fire… once… I do understand the need for security on planes but the post-9/11 tactics the US government has seen fit to employ (and that now have to be duplicated around the world) are just plain daft.

Why shoes? What’s to stop some whacko with a James Bond complex putting explosives in his watch? Or his hat?!?!

Or inserting them rectally and then really letting off a big one….?

One thought on “The War Against Error…”