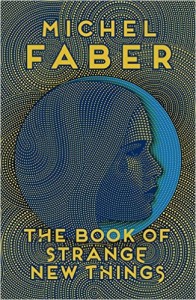 Peter is a pastor preparing to be separated from his wife Bea because he’s off to preach the gospel in a new world on a dangerous journey and he may never be coming back. However, this isn’t the 1700s, this is the future and the potential converts are non-human aliens on another planet and this isn’t a NASA project or even a governmental one but an entirely privately run operation.

Don’t be put off by it being an SF story as, like all truly great SF stories, it’s just hiding a far more contemporary (even historical!) narrative below. The tech is in the background (even the method of travel is a bit vague) and what matters is Peter’s burgeoning relationship with the native species and their adoration for what they call “The Book Of Strange New Things” – the Bible.

What you get is part religious allegory, part actual dissection of religions, love, nature, devotion (to a god and to a partner) and just plain part fairly unexplainable meditation about what distance does to relationships (Peter and Bea can communicate but only in text and then when he’s in the local village he has no contact with her for weeks).

The human race back on Earth seems to be tearing itself apart while he’s away but it’s told by Bea almost like incidental news about an ailing and far away relative and the base on the planet Peter is on has no access to contemporary news.

Look, I’m doing a bit of a ham-fisted attempt at explaining why I liked this so much (and I did), that’s why I’m not a professional reviewer, merely a reader who likes to point you in the direction of things or away from them as the case may be.

His mulling over of huge themes is great, his visualisation of the planet and the aliens Peter gets to know is impressive. Loved it, not for everyone but very clever literary speculative fiction so definitely for me.