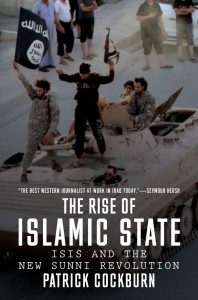 I’ll keep this one brief as this book does the same and is exactly what I had hoped it would be.

Cockburn addresses the history of the creation of IS, its roots in the Sunni/Shia conflict in Iraq, who’s financing it and the demarcation lines (at the time) in less than 200 pages.

He succinct, very well versed in his subject and I came out of it knowing far more and having a far more clear picture than when I went in. I suppose the only weak point it might have is that the conflict in Syria and Islamic State attacks in the west have moved on quite a bit since the book was written in 2014.

Shouldn’t stop you from reading a fine book that’s on one of the genuinely essential topics of global politics in the 21st century.